Newspaper of the North

Power of nuns comes to life in Ladakh 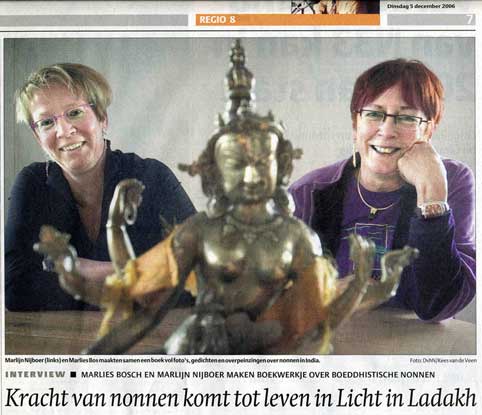 Marlin Nijboer (left) and Marlies Bosch took along a book of photographs, poems and reflections about nuns in India.

This book is full of Buddhist nuns on all women

At the time Marlies Bosch (journalist and photographer) and Marlin Nijboer (lyricist) agree that they were ever to cooperate, did the opportunity to do so.
The result is the book 'Light in Ladakh'.

Several 'accidental' encounters between journalist and photographer and writer Marlies Bosch Briltil Marlin Nijboer from Zuidhorn resulted in the book Light of Ladakh. The content consists of photos of Buddhist nuns in India's Ladakh. By the poems and musings of there Nijboer, the book is a work of art that has become all women. And it is so interesting for everyone to read.

Also for men! "Because," says Nijboer, "I told a male colleague that many people have lying next to their bed. And when told that fellow with red cheeks, although that also applies to him."

Bosch is already eleven years in Ladakh. From the very first meeting, she was gripped by the power that radiate the Buddhist nuns. She feels connected to them. "They think it not strange that I'm there. I'm like a fly on the wall."

Her publisher encouraged her to do something with the nuns. "He came by to one of my ideas for books to be discussed at a time when the room was full of pictures of the nuns for an exhibition in Gouda." Here, a book to come, "he cried."

Bosch wanted more than just a book. Nijboer The name came immediately to her when she thought about who would take care of added value. "We had met each other recently over a possible cooperation and philosophizing," says Bosch.
Nijboer was right to poke. Although she's feeling totally knew nothing of Buddhism. I was involved that she only had two weeks time with the photos poems to write because the first copy in November was to be completed. Then in a Haas-Ladakh festival.

Bosch talked her into an afternoon of Ladakh and then left for America. "Then I just started," says Nijboer. Through the Internet she found information about Buddhism. The process for writing Nijboer went through, can be found in the book. On the first pages are poems from which to conclude that Nijboer doing its best to find information about Buddhism to incorporate them. That changes when you're ready for the portraits of two old nuns.
Nijboer, "I wanted to capture their life in a poem, but they both have roughly the same life. Then I really look at them as I go to work differently too. I tried to connect to the soul. And then the words automatically. "

This shift continued in the rest of the book. The reader's thoughts into poems and portraits in motion pictures. In short, there is a development in the book. Like life itself. Nijboer know: "My life is by writing the lyrics changed. Due to speak to the nuns to crawl, I am closer to myself."

The booklet is  10, - for sale at The Pelican in South Horn. There are also sets of cards for sale for  5, -. Larger numbers of books and sets may purchase tickets via the websites: www.ladakhnuns.com and www.taalstudiomarlijnnijboer.nl .

The proceeds will go to the nuns in Ladakh.

We have 194 guests online