On Mother's Day May 14, 2007 was held in Haarlem, the highly successful third Ladakh Festival.

The festival took place in a suitable home made, but it still turned out a little on the tight side when more than one hundred people at the festival were made. Fortunately, the people between the workshops through the garden, where sales of many items from Ladakh and Tibet was successful.

Apparently in the Netherlands need more information about the life of Tibetan Buddhist nuns.

Some people gave to the training of a nun like to sponsor, people asked about volunteering in Ladakh, and the summer showed that some actually have contributed to various activities DFLN in Ladakh. 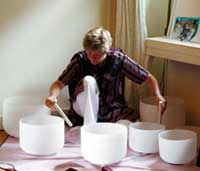 The festival brought in around  2000.00, this summer well spent in Ladakh.
We are now planning a fourth Ladakh Festival on October 21 at the Jewel Heart Center in Nijmegen is held.

Photos of the festival »

We have 257 guests online