In the beautiful chapel of the House in January of Besouw Goirle found in the fifth Ladakh Festival. The entourage was really beautiful and the atmosphere of the festival was very beneficial. It was a wonderful combination: an inherently Catholic chapel with stained glass windows surrounding the colorful decorations on Buddhist footing.

There were over 130 visitors present during the varied festival: lecture with slides about the nuns, a beautiful film, particularly on the lives of nuns in Nyerma, highlighting the difference of living and training between nuns and monks, made by Polish filmmaker Malgorzata Skiba. Myra de Rooy could not attend that day because a huge demonstration took place in Amsterdam on the situation in Tibet, where they are because of her background (International Campaign for Tibet) had to be present. Marlies Bosch took showing her reisdia's about the life of nuns in Ladakh in particular for its account. 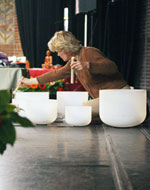 Thea van Dijk led the Sacred Dance, where unfortunately the range of workshops had little time, and Giny Brummelhuis led to a beautiful crystal bowl meditation.

The whole festival brought, partly by the charity dinner was cooked by the Committee Goirle, over  2500.00, that will benefit the various projects in Ladakh.

The following Ladakh Festival is held in confidence in Flowery Gallery Aldtsjerk (near Dokkum) and will take place on October 26, 2008 and 1925. On October 25 there is also a fundraising dinner, where you can specify for all.

This gallery will be from October 10 to November 10 held an exhibition of the latest photos from the last trip to Ladakh Marlies Bosch.

Photos of the festival »

We have 462 guests online