Shortly after the catastrophe visited last summer at Giny Brummelhuis, former president of the DFLN, Ladakh. She was struck by the devastation and the serious consequences for the local population. In response, she has her own friends and family an action designed to raise money for medicines in Ladakh.

In the below letter, you read call her donation. The action of Giny has yielded  530! The amount DFLN has been transferred to India. It fits well with the financial relief that the DFLN sent to the Ladakh Nuns Association, which oaeen Dr. Tsering Palmo Amchi initiative was supported trauma to help the many who left their homes and / or family through the storm lost. Photos: Giny at Brummelhuis 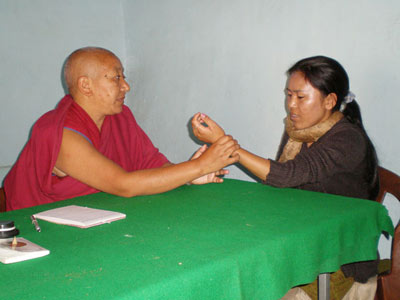 As many of you know I'm last to Ladakh (Northwest India in the Himalayas) was. I came on August 15 at once on August 5 as a major natural disaster had occurred. On the night of May to August 6 was a mudslide down the high altitude, 6000 meters. It took all the fields, houses, people along the way who came. Result, 200 dead, 70 missing, whose people are still missing and a lot of damage to homes, roads, rivers, electricity, water and mental suffering that no pen to describe.

I was there three weeks have been a lot of money you had given me spontaneously for food, tents and repairing roofs to be performed. It was heartwarming as much support and I felt that I was not alone. Two weeks, I have to LNA in their monastery, Ladakh Nuns Association lived and it was not easy. The roof was broken and two weeks I slept in a bed full of dust, because the 'Labour' were repairing the roof and thereby got a lot of dust and mud Fri I am also sick and there is miserable when in the middle of the night vomiting, diarrhea, and no water and electricity to clean up the mess. But I was glad I was there, because I have many wonderful moments. The joy of all the nuns that white Europeans came to them after the disaster (why did you come, it's your holiday, you can go to the sun). Dr. Palmo yielded taken me to families who had lost a family member. So special in a different culture to share the grief of the deceased. Grief is universal, words do not, and there is plenty at that time. Very touching.

In those weeks I have been on medication trek through the Himalayas. With one truck to 6 hours in the morning with six nuns. On roads that were no more roads, but paths of holes, bumps and broken homes everywhere. Then to the east and that was okay. Direction highest pass in the world 5600, Kardong-la pass, meter, to seek medication. Many medications can be found at that height and it's hard to work with a bag on your back with slippers to walk on the wet stones and then having to scramble or climb. I joined in, also carving out roots into the ground. At one point, the nuns sent me to the camp to prepare food, because it was too dangerous. During lunch we were eating during snow without a tent over your head and the next moment the sun began to shine again. After searching, the manure (dung) from the yaks, which in winter is used as fuel. 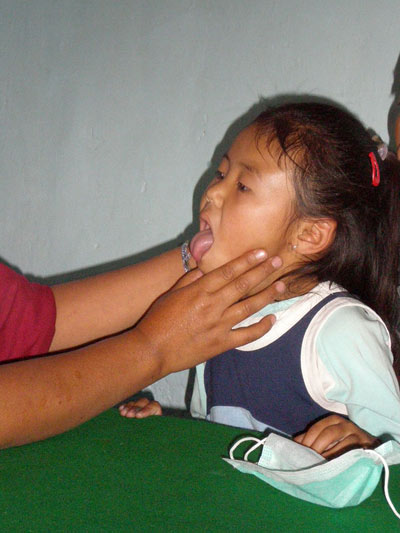 This was the 5th time for me in Ladakh and never have I seen such changeable weather. The monsoon was always hanging on the mountains, why Ladakh more like a desert, but by global warming, the cloud over it and let it rain in a terrible manner. The fear is that next year that could happen again.

On Sunday, Dr. Palmo her surgery in Leh. Dr. Palmo's Tibetan doctor and one day an average of about 50 people to her for consultation, pulse and tongue diagnosis, and after the disaster much talk and comfort. Dr. Palmo gives consultations to the poorest people of Leh (Labour), almost the lowest caste of India, the Tibetans have no status because they still have refugee status. The people are grateful to the LNA much for them. Dr. Palmo is important that the Ladakhi people and the Tibetan people can come to her and the LNA may contribute to their health. These people are very poor, even in Leh, the slums. She gives her almost free consultations and medicines. This LNA has almost no income. There is currently a backlog of rent of the office, small desk-cum-waiting room and consulting room.

Dr. Palmo lets people 20 rupees (about 30 cents) to pay for the consultation and medicine (herbal powders and pills) are free. Dr. Palmo said that she and the LNA is really helped would be if the drugs can be paid. She said that after the disaster many people in shock and depression have become. The drugs must quickly get another truck and driver to be hired back to the 6000 meters to go looking for drugs. The consultations can afford the rent of the office. 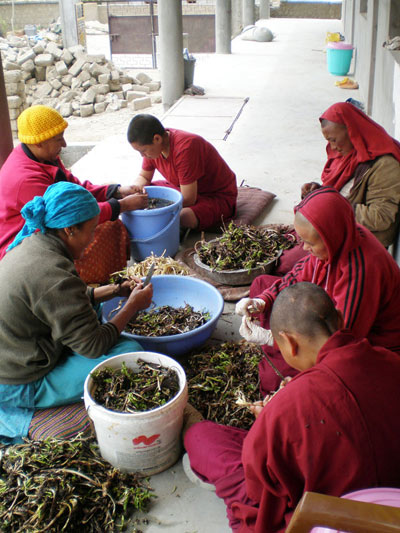 The cost of drugs is mainly down to hiring the truck driver, as Leh is on 3500 meters and 5600 meters they need to, you can not walk. Sometimes the nuns in a hotel overnight if they are 2 or 3 days to find. The drugs are also becoming harder to find. After searching they hire some Tibetan women to the drugs clean and jacking into powder. It's a huge work to be done several times a year.

Request: I would ask you to make a contribution to medicine at the Ladakhi and Tibetan people of Ladakh. They really need. For 5 euros for three people to receive medication for one month!

The amount may be made to: General Foundation Ladakhi Nuns

On behalf of the nuns in Ladakh Thank you very much,

We have 592 guests online