Yesterday the inauguration of the monastery Gephel Shadrubling in Basgo took place. We arrived around half past 10 in the morning.

At a given moment, with great pomp of the military came the minister of tourism.. At half past twelve the main guest, the Phyang Rinpoche, arrived and the little nuns adorned him with the traditional kata (white scarf). 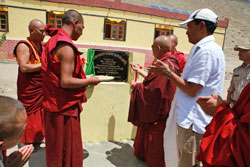 Before anyone realized what was happening, he had cut the ribbon at a plaque completing the opening act. Then with a procession he went into an already crowded tent where hundreds of villagers were waiting...

And then as the norm here in Ladakh is, came the speeches. ... The two staff members, Namdol and Dechen, gave the first speech. Namdol in her excellent English which Dechen translated into Ladakhi... 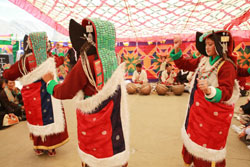 The minister spoke highly of John Hunt of the Lotus Flower Trust, main sponsor of the project. After which a group of Ladakhi dancers enacted a piece of folklore. Then more speeches including one by myself.

Meanwhile three hours had passed and the party came to an end. The locals were served food, we ate what was in the monastery itself.

The nuns now live in the monastery and the first project will be to raise funds to furnish the school building. Currently there are no benches or blackboard.

If you want to sponsor a nun ... do not hesitate to visit our website at sponsor the nuns.

We have 183 guests online