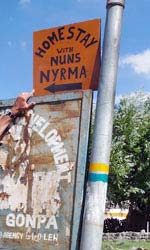 The summer of 2008 was mainly for DFLN and volunteers dedicated to the Guesthouse. No, not the guesthouse as we originally called it "home stay with nuns" as the official name. This on the advice of thik Rinpoche explained to us that a guesthouse and duties shall be paid for homestays not.

The first season has been tremendously successful with very enthusiastic reviews from including the Netherlands, Austria, USA, Switzerland, UK and Israel.

For the first guests could be purchased was still necessary, regulated and organized.

Josephien was the first volunteer and she was a true pioneer. The first was the whole kitchen equipment be purchased and shopping in Leh is slightly different than in Nijmegen or Groningen. It takes time and patience. Controlling eg half for cooking gas cylinder at the end of the season failed.

Electricity is a different story. There is no telling to raise. Sometimes there is no electricity two days and then half a day though. This also affects the water in the rooms because the pump runs on electricity. If that fails then we literally hand pump to pump water. Water tote has some strong arm muscles yielded volunteers.

Then there with a tile saw to cut skirtings to be making, there was again no electricity, the generator also begged off. Rinpoche in person was itself interfere in the unit did it again!

In the prayer room cum dining room of the nuns is a removable wall that created the space in winter easier to heat and serve for more targets simultaneously. These new wall was painted and it would not have the luxury (plywood with letters on them) floor paint too. Doing was a very different approach to light between the Ladakhi way of painting "and the" Dutch way of painting. " A primer layer in the eyes of the nuns are not necessary and if the painting is not fast enough, but then a dash to thinner. Masking and the handles and tabs before painting is no need .... 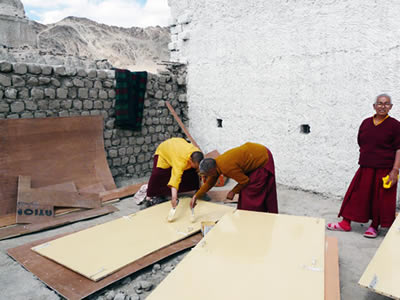 As long as you do not have your nose on top of it the result is quite nice. One volunteer noted that after one week painting Nyerma laughed more than one year in the Netherlands.

When LNA was this summer busy and hectic as usual: lots of visitors, many discussions, many construction activities. In addition to the daily work of the organization continued.

The nuns in the convent living and studying in the summer, two weeks vacation. Most visits than their families often live far away. In winter, when vacation is three months because of the extreme cold, they can not reach areas like Zanskar. For Dr. Tsering Palmo is a support which since last summer, the staff has been expanded. but as always it is much too busy and comes out of planned peace nothing.

In June we took the older nuns Nyerma and young nuns of LNA have a day out to matho. First visited the monastery after a picnic. Dr. Palmo took us to a beautiful green spot with two streams. The young nuns are wonderful, but splashing in the water. The elderly enjoyed their fun.

In September, LNA honored with a visit Karmapa. For the visit of half hours the nuns spent ten days in preparation. Karmapa spoke of equality between men and women. This visit was so special that it is a very positive effect on LNA.

Since the spring very young nuns living there. They range in age from 12 to 15 years. At the first meeting I estimated them from 8 to 12 years. Except that they look younger they are much more playful and uninhibited behavior than their peers in the Netherlands. What 15 years in the Netherlands make you happy with balloons?

This group of highly educated young nuns DFLN has also contacted. Their great desire is an institution of higher learning set up in Ladakh.

Last summer a careful start with consultations or in Ladakh existence and scope for such an institute of higher educational establishments. This consultation will take place between the LNA and Gephelnonnen. Some of these nuns studying in Nepal and in the south of India because in Ladakh is no possibility for higher education. Some of them will be one of the first female Geshe are.

The homestay is in Nyerma a very special place. This particular location also attracts special guests. The guests are interested in the environment and especially in the lives of the nuns. They themselves often have special stories to tell.

The volunteers get very attached to the project, the environment and especially to the nuns. With much effort and enthusiasm they have this first season a success. The plan was that Ellen would be there from mid July to mid August, with one part and one part Josephien together with Anneke. That led to continuity in the way of working and especially in contact with the nuns. Between Anneke had emptied all the rooms because baseboards were made. There was a lot of chopping, crushing, hauling and cleanup again mainly associated. The mess was bigger than the building itself.

Menta was (almost literally) as the rear. She received the last guest this season and waved them off. Together with Ellen eventually cleared them finally left the room empty and the Guesthouse was winter, a big job.

For the nuns will be a huge transition now no more guest and volunteers around. Especially Detchen and Chamba, who daily were involved, it will get used to. Just like for us to get used again in the Netherlands without them and the rest of Nyerma. 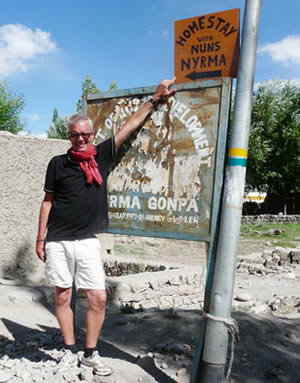 We have 136 guests online